‎Looking for accommodation near the University of South Africa ( UNISA )‎?

Melvin Residence Guest House is only 4.3 Km away.

About the University of South Africa ( UNISA )

In January 2004, the former Unisa merged with Technikon Southern Africa and incorporated the distance education component of Vista University (Vudec) to form the new Unisa. The merger brought together vast resources and infrastructure, while consolidating the knowledge bases built up over the years by the three former institutions. Legal establishment: On 1 January 2004, the new Unisa officially came into being through the merger of the former University of South Africa and Technikon Southern Africa with the incorporation of the Vista University Distance Education Campus, Vudec. 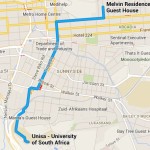 Air-conditioned bedrooms
No smoking on the premises
Private entrances
Serviced daily
Hair dryer, alarm clock & toiletries
Refreshments: Tea & coffee
Fenced in parking with electronic gate
DSTV
Free Wi-Fi Hotspot
Free private parking is possible on site
All resident guests can enjoy a complimentary breakfast
No children under 16 years
No capacity for extra beds in the room
No pets
All prices include VAT
Prices are subject to change.